By The LondogFebruary 27, 2021No Comments 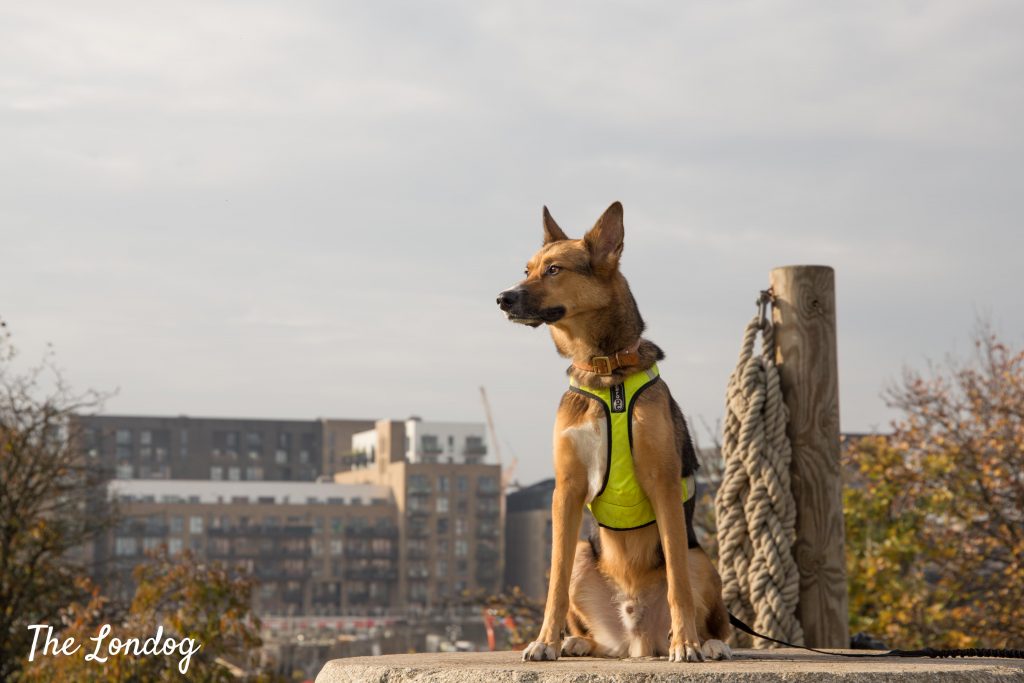 In our guide to the best dog walks and trails in London we previously mentioned The Line, a route that runs along East London waterways (mainly North, but also for a short part South of the river) on the Greenwich meridian and brings you to discover historic sites, nature and art, for free! It may not be the most pictoresque walk you can do in London as there are some unglamourous stretches (if you are looking for a romantic one, the Regent’s Canal may offer a better alternative), but you’ll see and learn things that are certainly unique and less mainstream.

Before the current restrictions, we explored the trail and in this post we tell you what to expect and why this can be a good option for an alternative dog walk, when you are bored of the usual paths and parks.

Walking The Line trail in East London with your dog 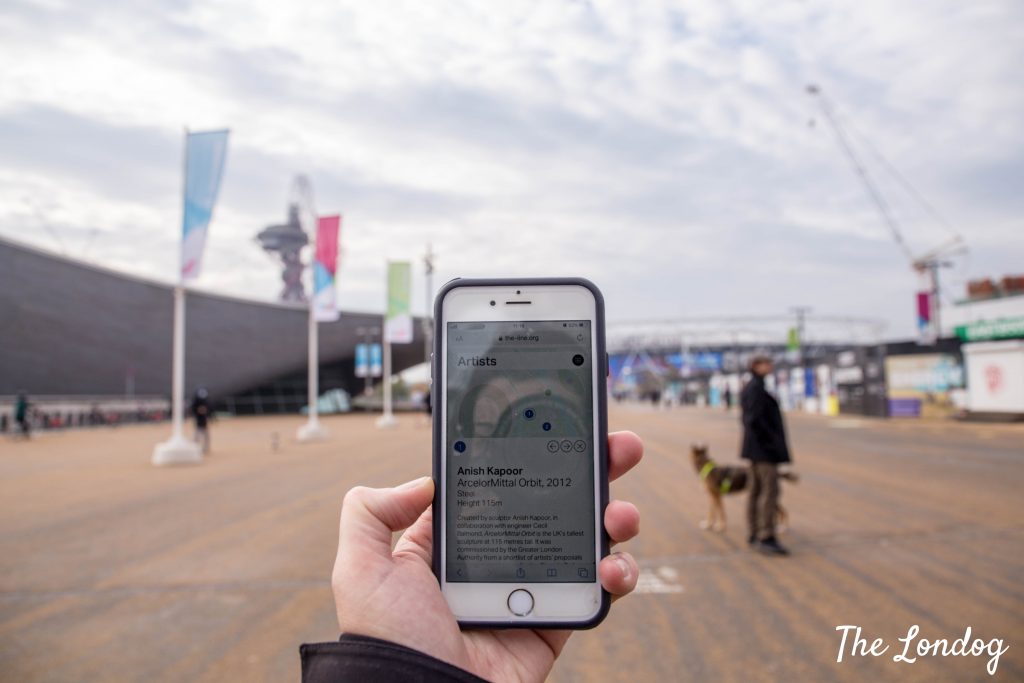 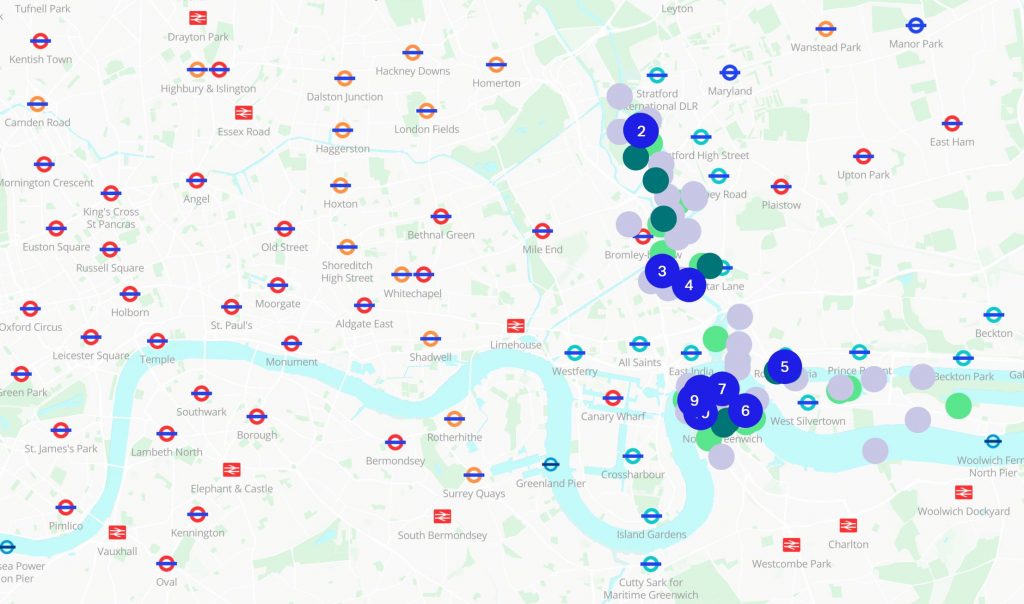 Before diving into the route, a brief note on how to make the most of your dog walk on The Line: you will need is a smartphone with full battery (essential to access The Line’s interactive map and artwork/landmark information), on top of appropriate shoes and, as usual, a bottle of water and a bowl for your four-legged.

You could either start from Stratford or from the North Greenwich peninsula, just consider that if you’d like to walk the full trail you may allow for the whole day – it took us in the region of 5 hours and a half to get from Stratford to Trinity Buoy Wharf, through stopping at the various spots along the way to read about landmarks, take photos and some treats.

With the current Covid situation, the Emirates Cable Car is closed and in any case we should not take non-essential public transport trips, so the recommendation would be to stay North of the river, if you are an East Londoner that can reach the trail on foot and make it a circular walk. Or, if you are based South of the Thames, you could walk the shorter part of the trail that is in North Greenwich.

Stratford to Bromley by Bow 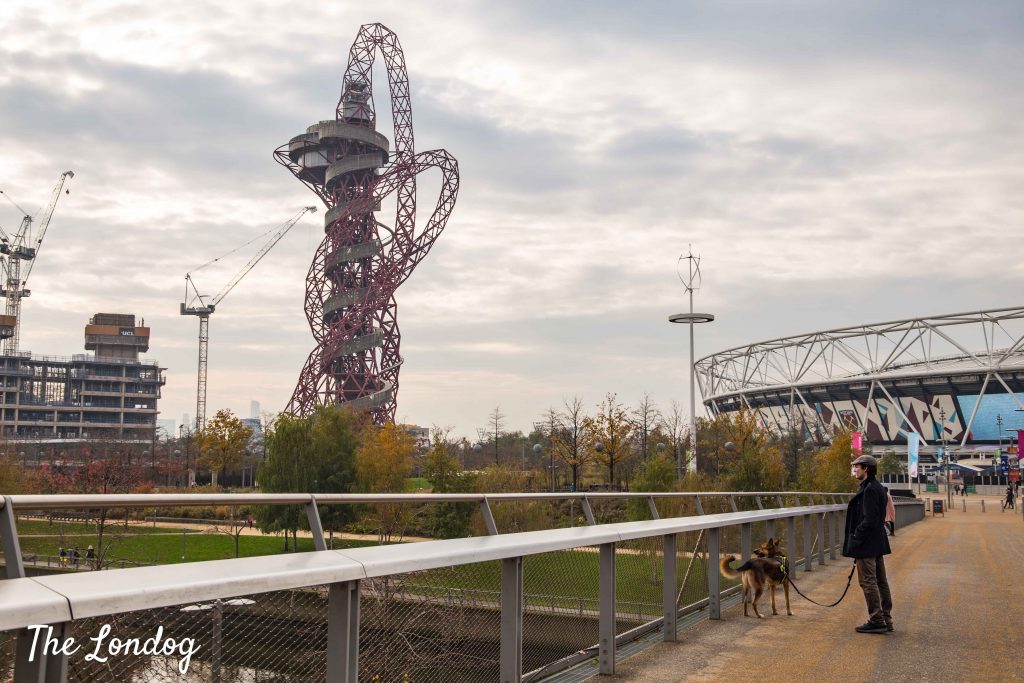 Our starting point was Stratford’s Olympic Park, with a stroll in the curated 2012 Gardens, built for the 2021 London Olympic Games and divided in four climatic zones.

We discovered (thanks to The Line’s interactive map) that the ArcelorMittal Orbit, which peaks behind the Olympic/West Ham Stadium with its red futuristic steel helixes and 115 meters of height, is the UK’s tallest monument. Great to know for (our and) your next trivia with friends! 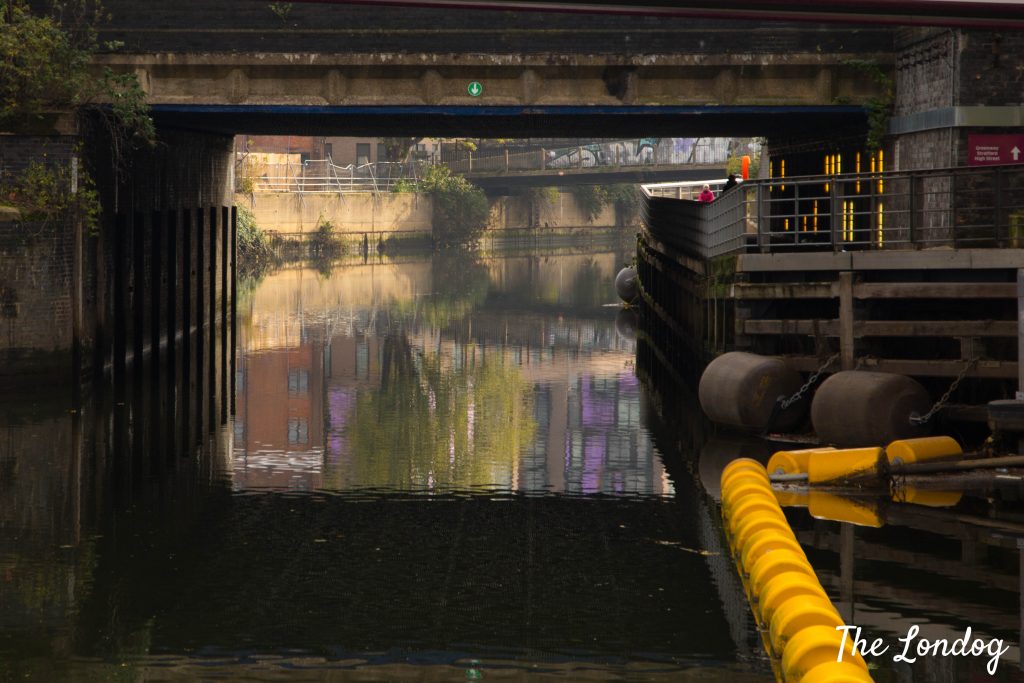 The Line walk broadly follows the Greenwich meridian, but while it features spots of interest in the form of colourful dots on its map, it does not draw a recommended routes between them. This means that, in some stretches, you may face a choice among alternative routes (like once crossed the Waterworks River and High Street, where you could continue straight on the Greenway and later turn on Abbey Creek, or walk along the High Street and turn on Three Mills Wall River). This can be a bit confusing at first, but surely it adds to the exploration! 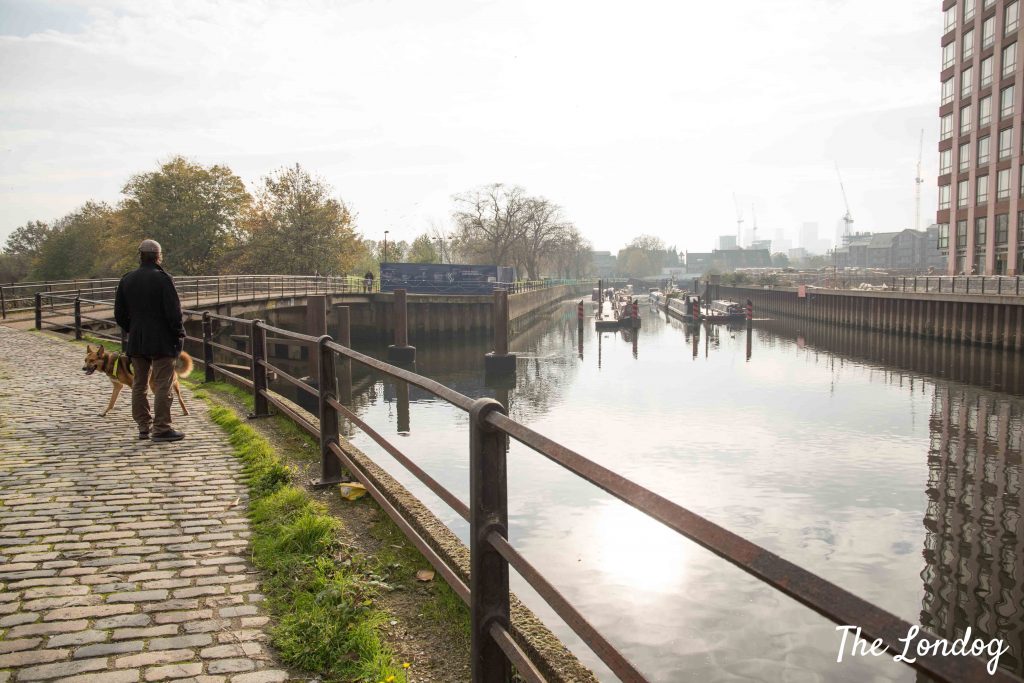 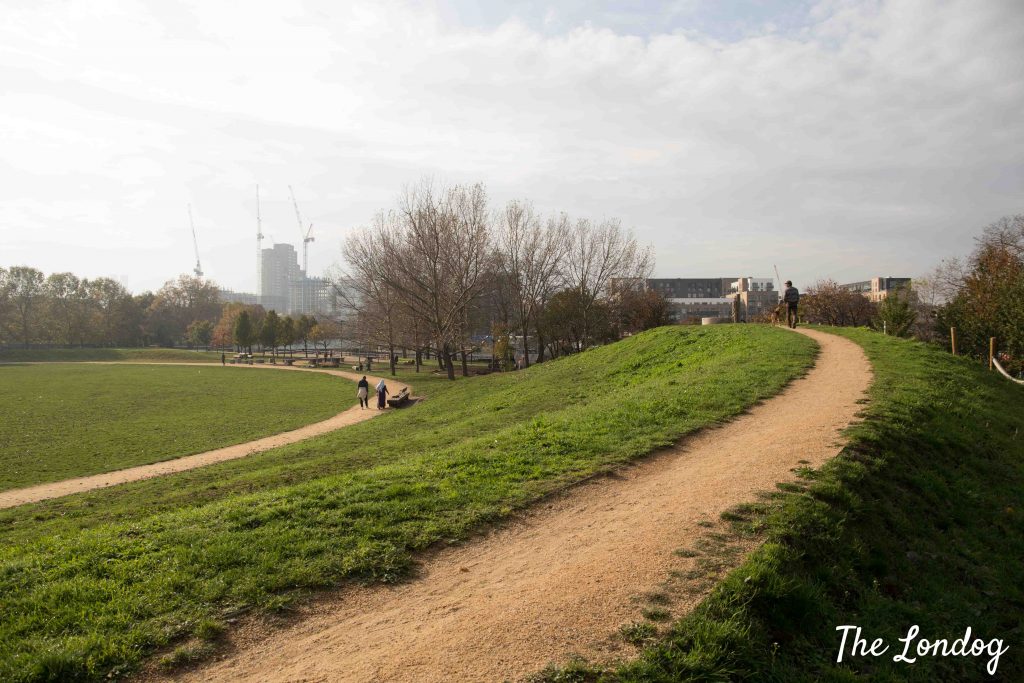 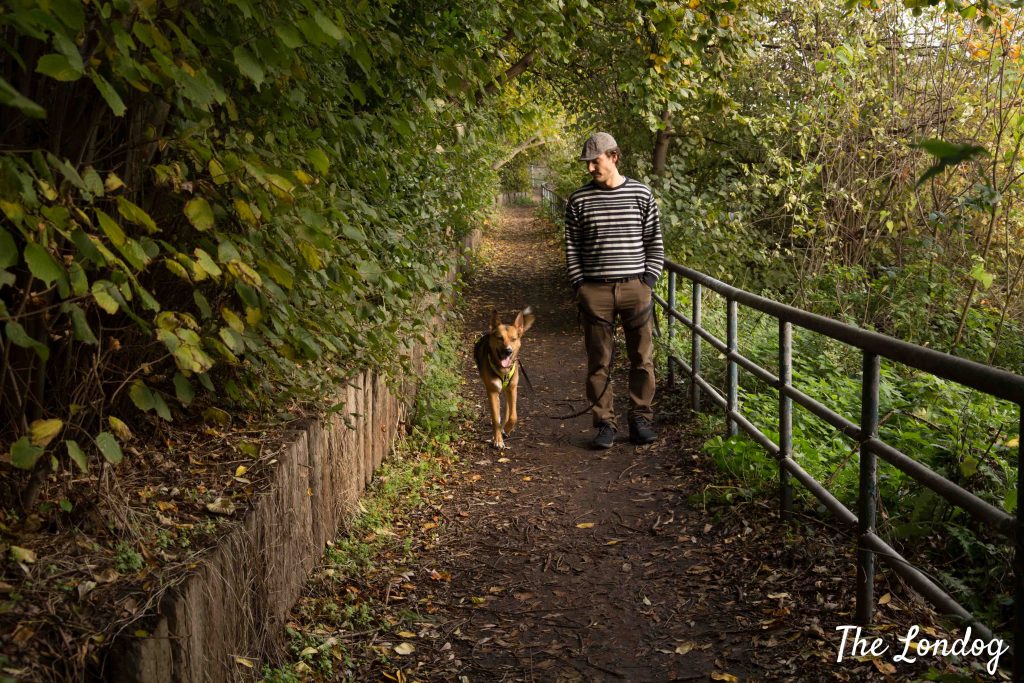 If you end taking the route that brings up along the Three Mills Wall River, I highly recommend making the detour to reach Abbey Mills Pumping Station before continuing South. This will take you a bit off a linear walk, taking you through an unexpected and rather pleasant nature walk with fenced off woods on one side and a marshy landscape on the other, but will allow you to see (from outside only) the grandieuse landmark that is Abbey Mills Pumping Station. 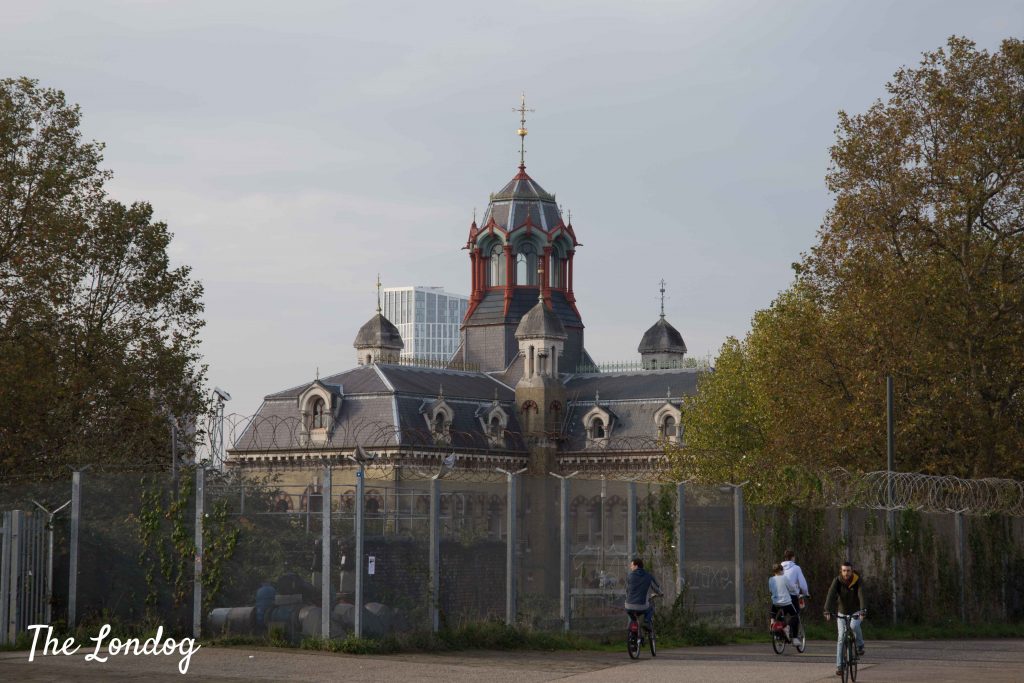 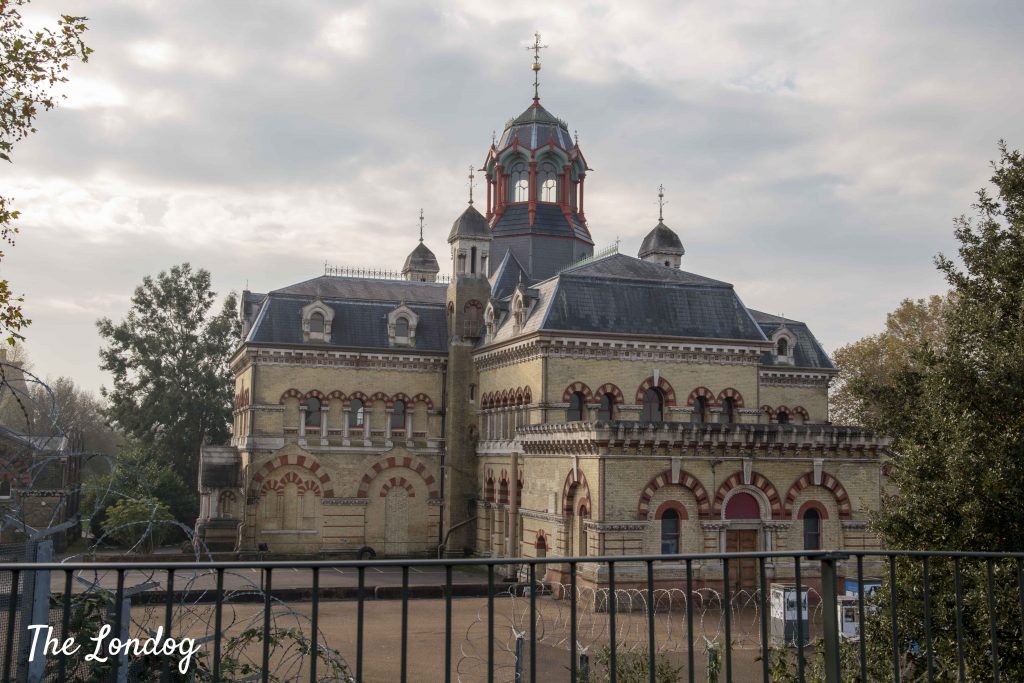 Abbey Mills Pumping Station is a sewage station that was part of the London Victorian sewer system designed by Sir Joseph  Bazalgette. Nowadays, the station is still in full operation and so it is closed to the public – the rare times it opened its door to visitors were in occasion of special events such as Open House London. We have a thing for pumping stations (read all about a dog-friendly visit to the Crossness Pumping Station) so very much hope we will be able to visit it in the future when it will be possible -.

The Station is surrounded by high fences and gates, but if you walk on the Greenway, there is a a spot where you will have a good view of the building in all its magnificence. 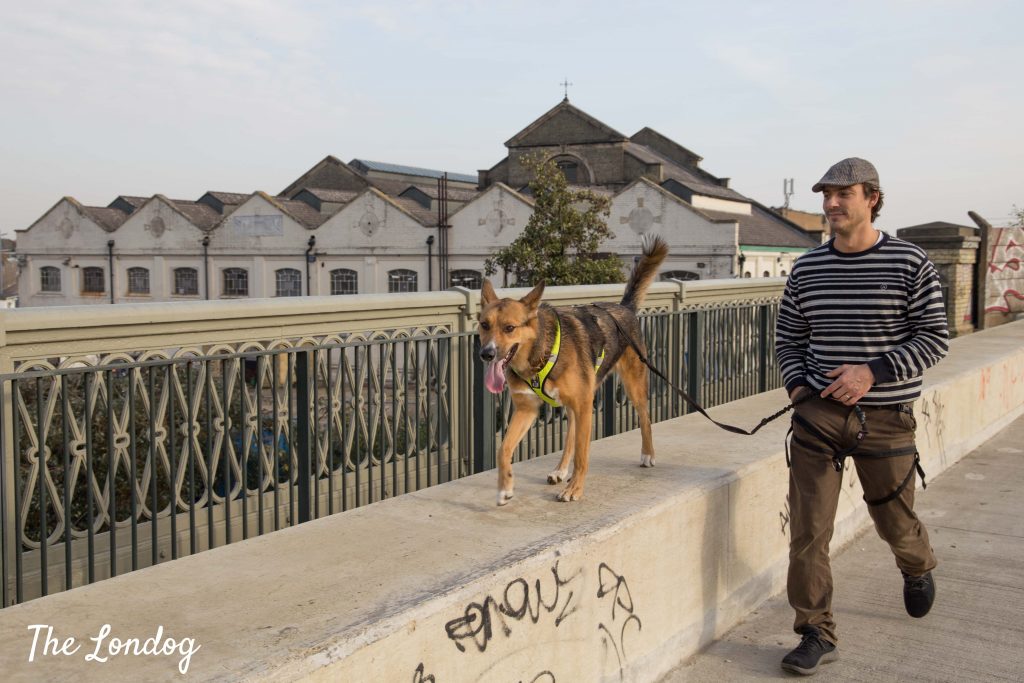 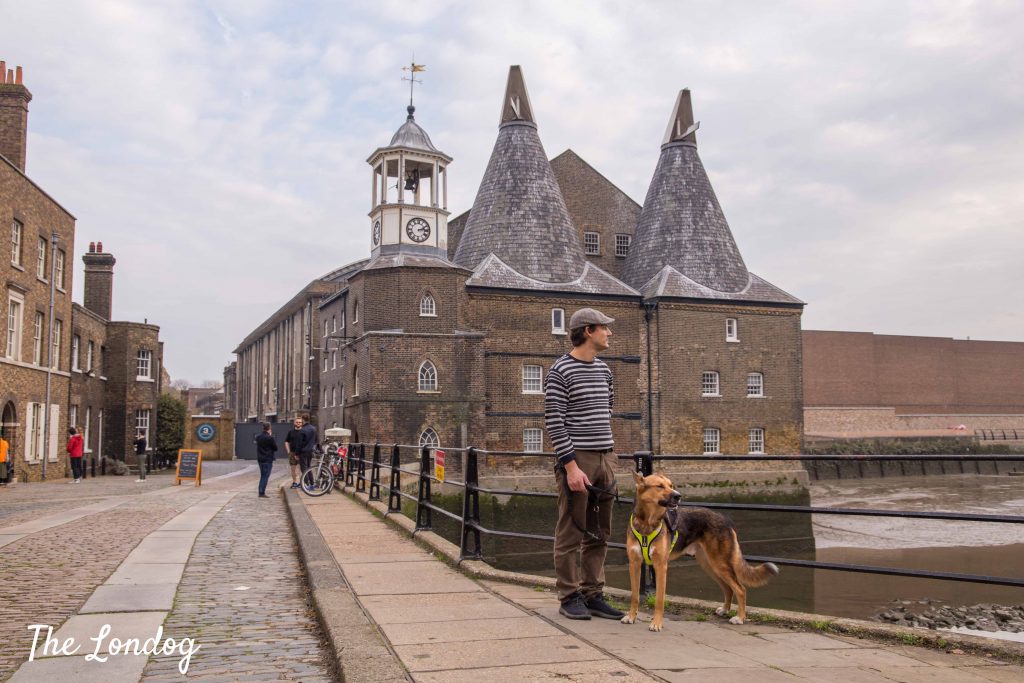 To me, one of the most surprising spots of the whole walk was probably Three Mills Island, a cobbled bridge/complex which has Grade I status with its Three Mills buildings. These ancient tidal mills and bridge, dating back to the 1300s/1400s, were originally used to ground flour to be supplied to bakers in Stratford and then transformed in a gin distillery. Today some of the buildings are being restored by volunteers, while other are owned by 3 Mills Films Studios (Isle of Dogs animation film was made there!). The landscape looks nothing like London or the UK and, if you have ever visited The Netherlands, may bring your mind to the canals and architecture in some small Dutch towns.

If you wish to stop there for some refreshment, there is also a dog-friendly cafe at Mills House on the island, where you can get your coffee (or sandwich, cake, hot food) fix. 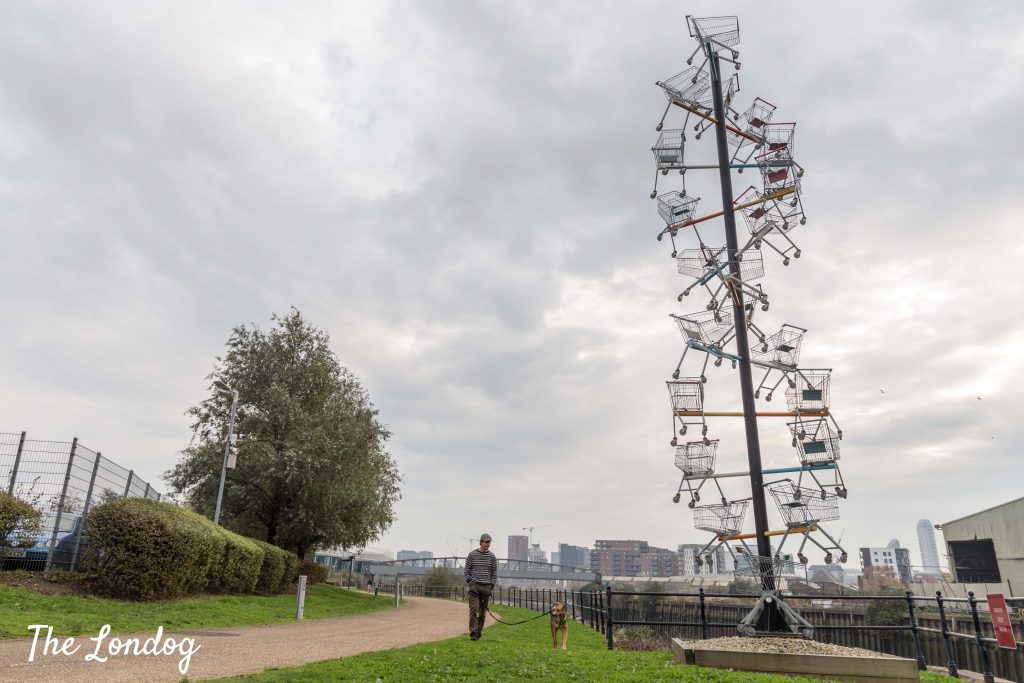 From Three Mills Island, the route takes you for a walk along the River Lea. Taking the bridge just before Bow Lock, and continuing South along the river, you will come across one of the most interesting art installations, DNA DL90 by Abigail Fallis, a giant double helix made of shopping trolleys, symbolising the modern society’s consumer culture, entwined in an individual’s genetic make-up. 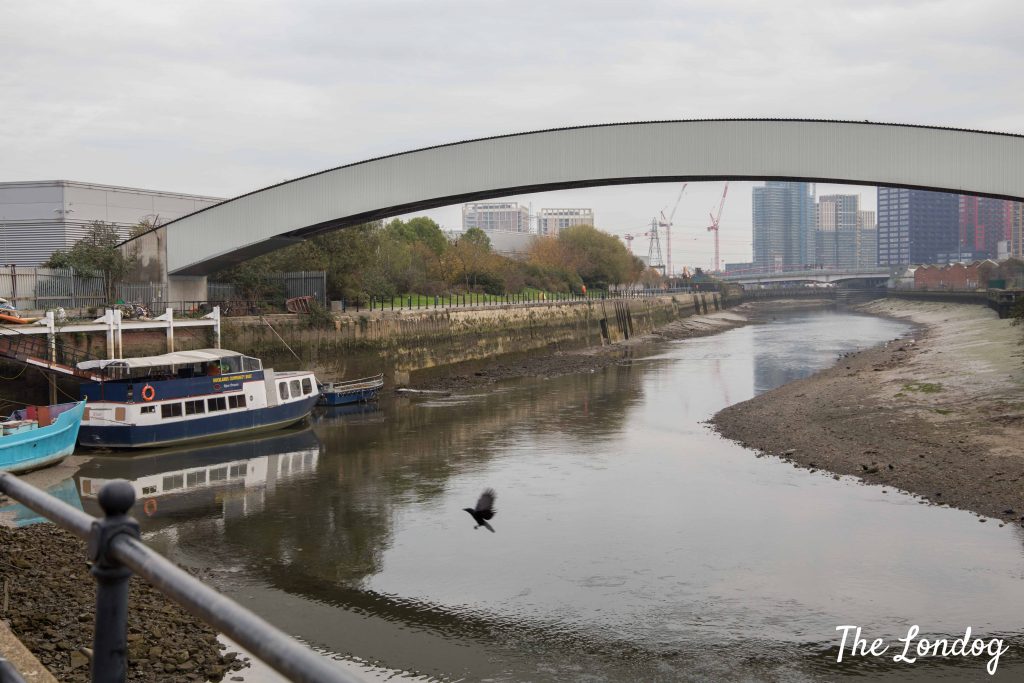 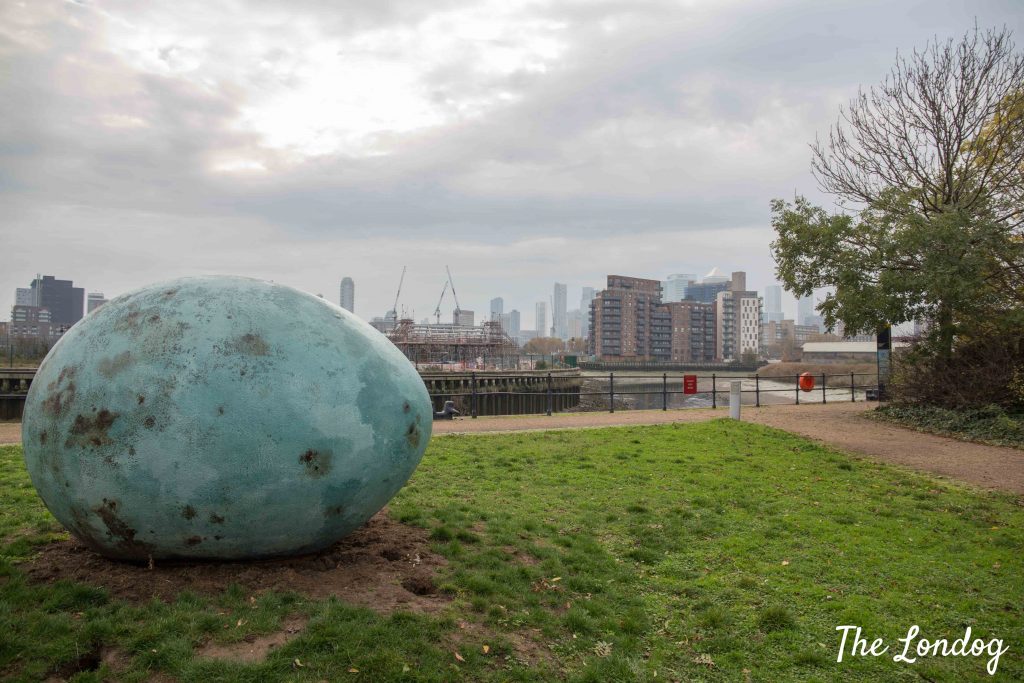 Not far from there, stop to watch (and listen to) The Hatching, a blackbird egg sculpture by Joanna Rajkowska, at the doors of Cody Dock. Acting as a reminder of the fragility of the natural environment, if you get close to the sculpture and listen carefully, you will hear it emitting the sound of hatching chicks. 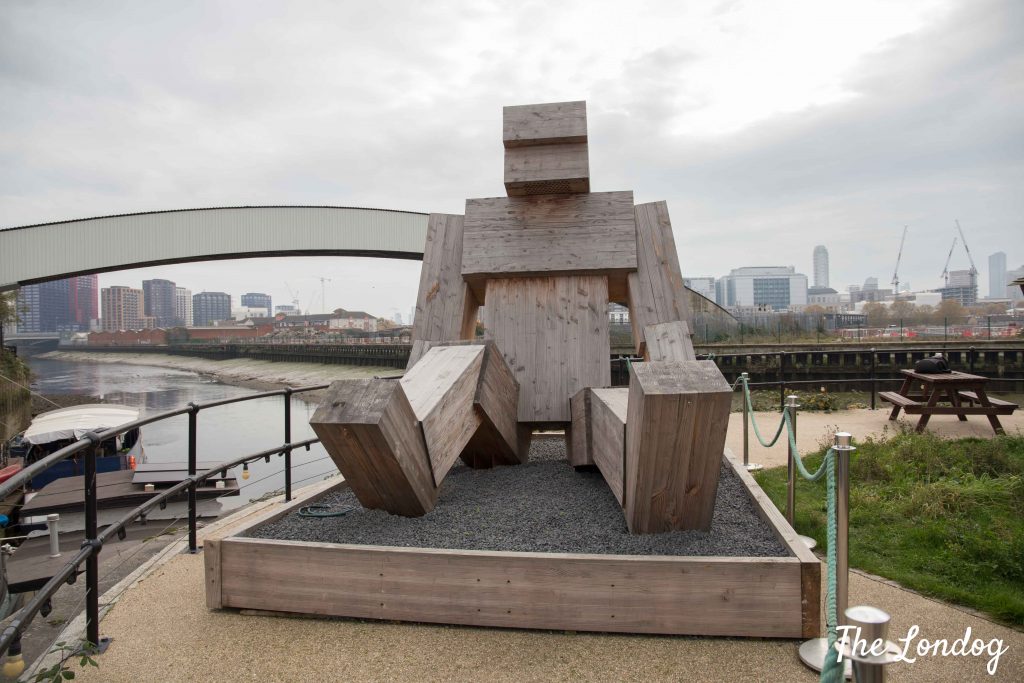 Cody Dock is an unconventional place, with lots of intersting features like sculptures, a red phone booth cut in half, flower beds and even a small beehive and chickens. Though when we visited, we found there was a bit of an unpleasant sewage smell in some points.

The riverside dog-friendly Cody Dock Cafe serves food and coffee and there are (outdoor) tables available where you can enjoy a break. 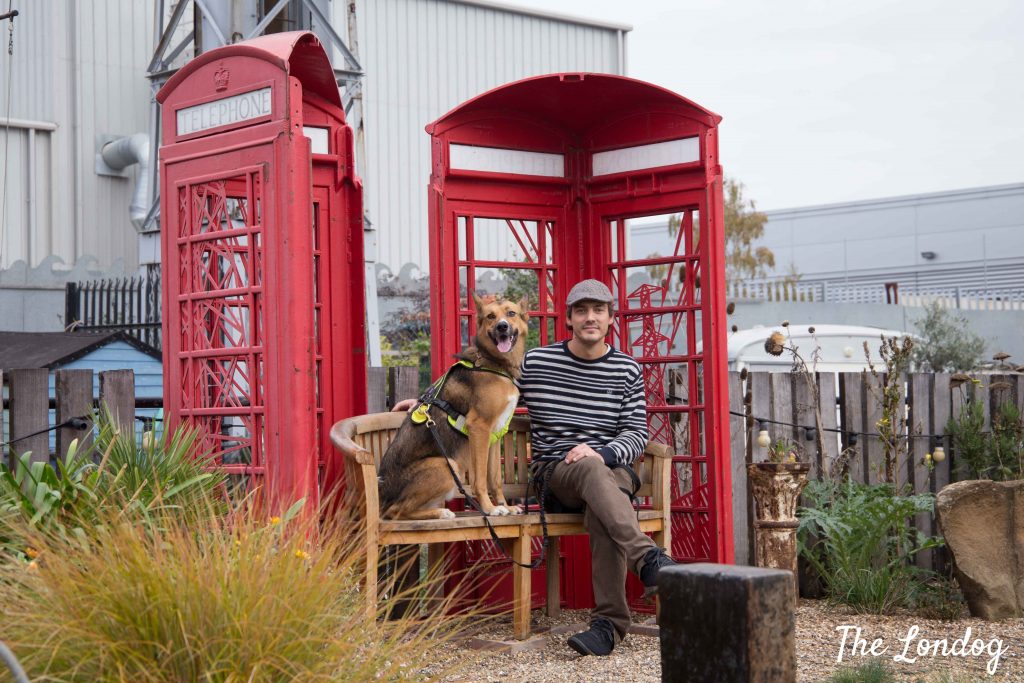 Once you leave Cody Dock, it can be a bit tricky to understand where to go to get to your next stop as signage is not great. Just take South Cres and turn on Cody Road until you hit Star Lane DLR station, then turn right on Stephenson Street. We ventured in the streets nearby and it felt a bit of a rough area, deserted and decadent, with old warehouses, workshops and rubbish on the street, and you may well not cross path with a soul. Probably a great spot for a movie, but it can feel a bit daunting if you were walking alone.

On the way to Trinity Buoy Wharf 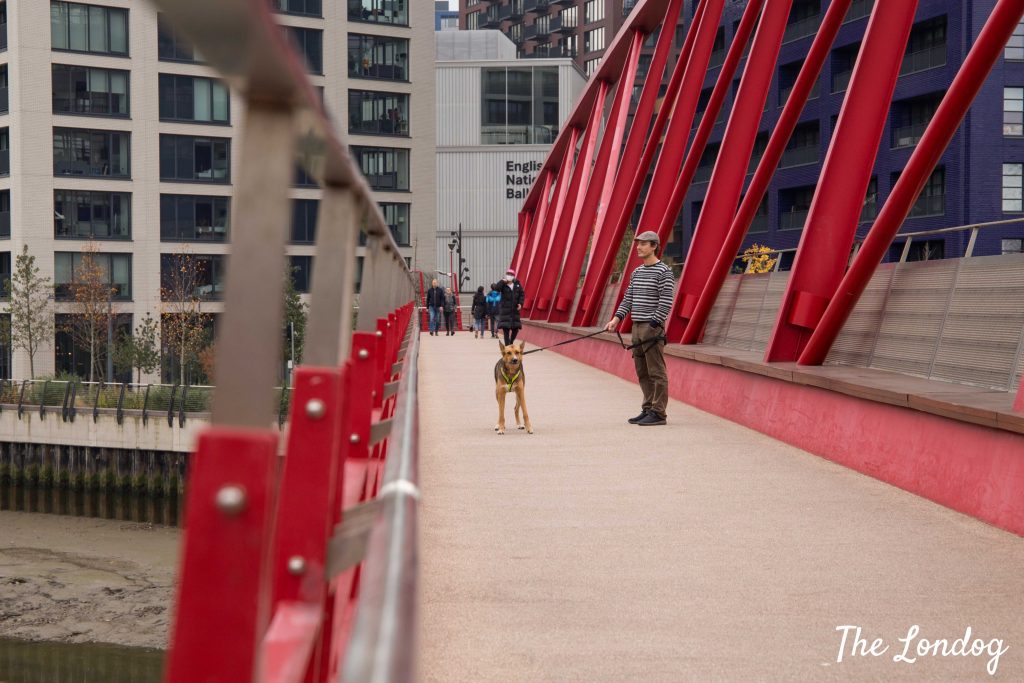 Next point of interest will be Bow Creek Ecology Park, a narrow peninsula cut in half by the DLR rails, leading to Canning Town station and to the red metal bridge, leading to the London City Island, full of luxury new buildings and easying your way to Orchard Place, your way to reach Trinity Buoy Wharf. It is really shocking to see how different Orchard Place looks compared to just last year or a couple of years back, when there were new buildings were few and just at the start of their construction and the place had such a nice character and felt a secret and undiscovered gem. Gentrification has definitely had a toll on the vibe, but Trinity Buoy Wharf still stands untouched and keeps all of its charm. 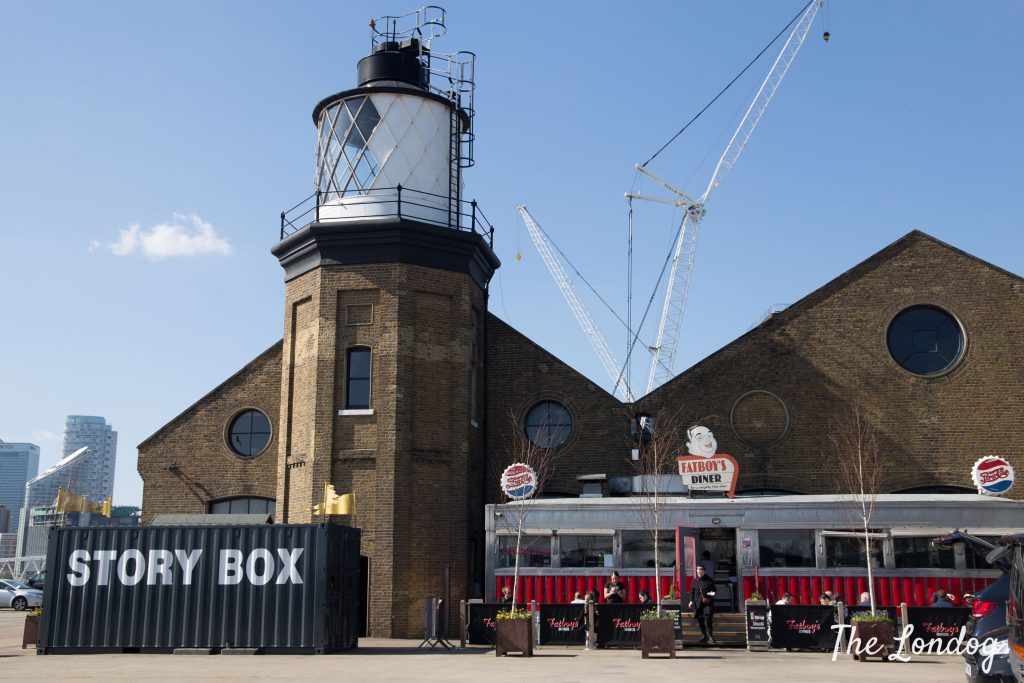 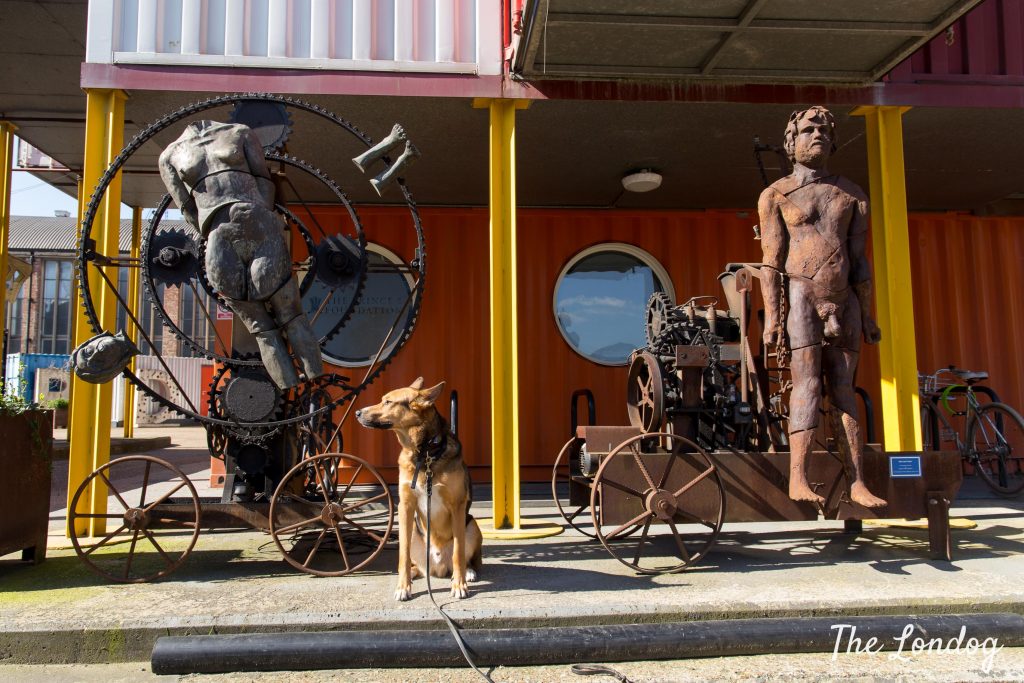 We talked about Trinity Buoy Wharf in a previous dedicated post, so here I’ll just mention some highlights. The place is very dog-friendly and together with your dog you’ll be able to stop at the Orchard Cafe, visit the Faraday Effect installation, the old lighthouse with its Longplayer music installation, see sculptures and have a nice stroll around. There is also an American Diner, which only allows dogs outside, so on normal (and warm) days, you may stop for a burger and chips at the tables outside. 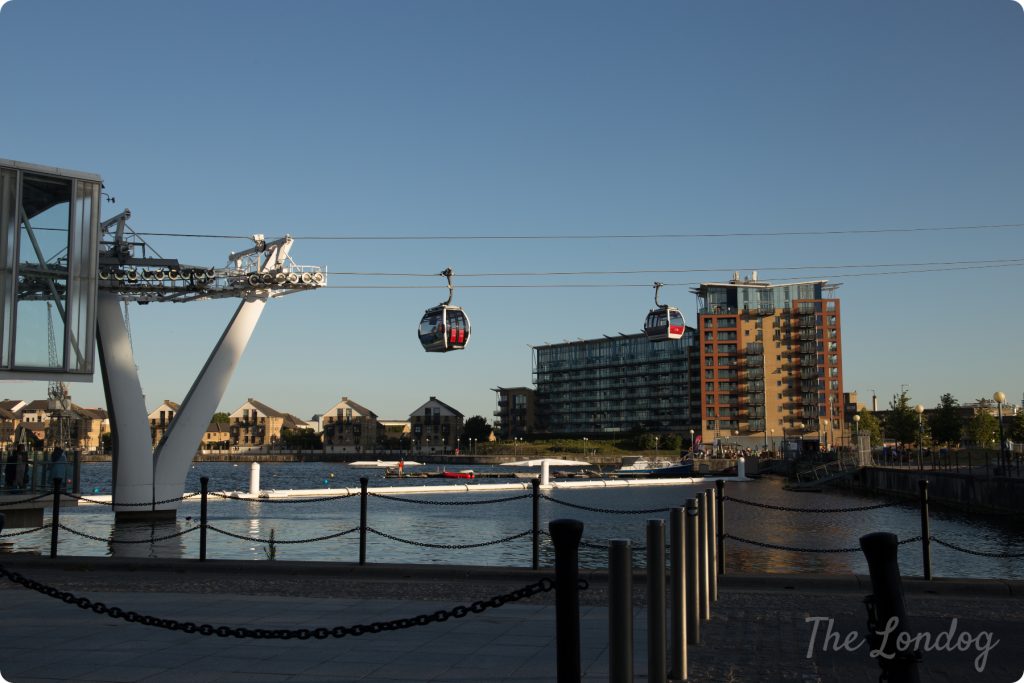 We did not walk further from Trinity Buoy Wharf to Canning Town and Royals Docks, on our walk, but if you still have it in you after going this far, you can continue your walk on The Line.

The Line’s map unfortunately does not help finding the best route to get from Trinity Buoy Wharf to the next point of interest on the map, however with Citymapper or Google maps, it’s easy to find your way to Royal Docks, where you can explore the points of interest in the area, before taking the (dog-friendly) Emirates Cable Car to get on the other side of the Thames.

The Line continues in the North Greenwich Peninsula 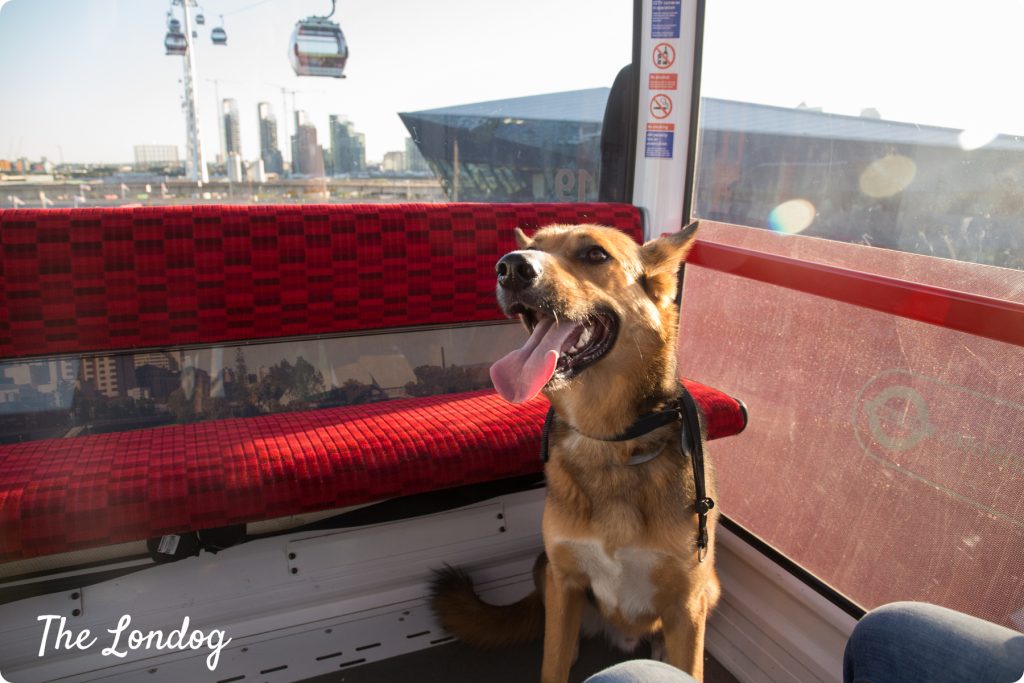 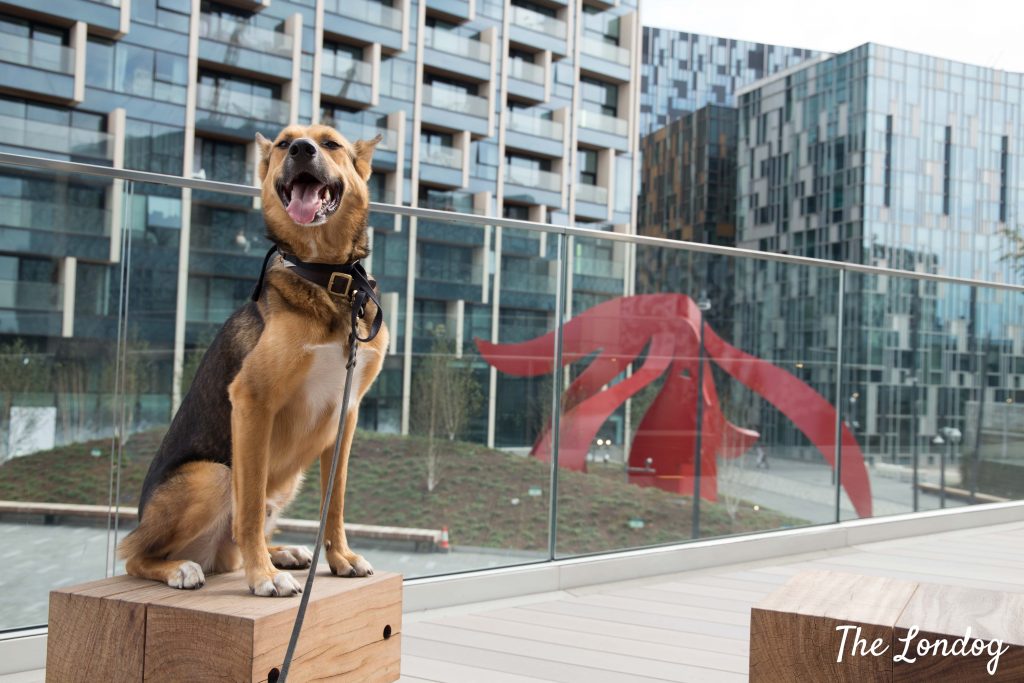 The North Greenwich Peninsula has been object of a massive redevelopment in recent years, and its embankment and its The Tide (a raised walkway) is a lovely place for a walk. There you will also bump into some art pieces such as Thomson a& Craighead “Here”, a road sign that at first may go unnoticed or leave you puzzled if you don’t read more about it, marking the distance of the work from itself along the Noth/South axis (24,859 miles in case you’re wondering). 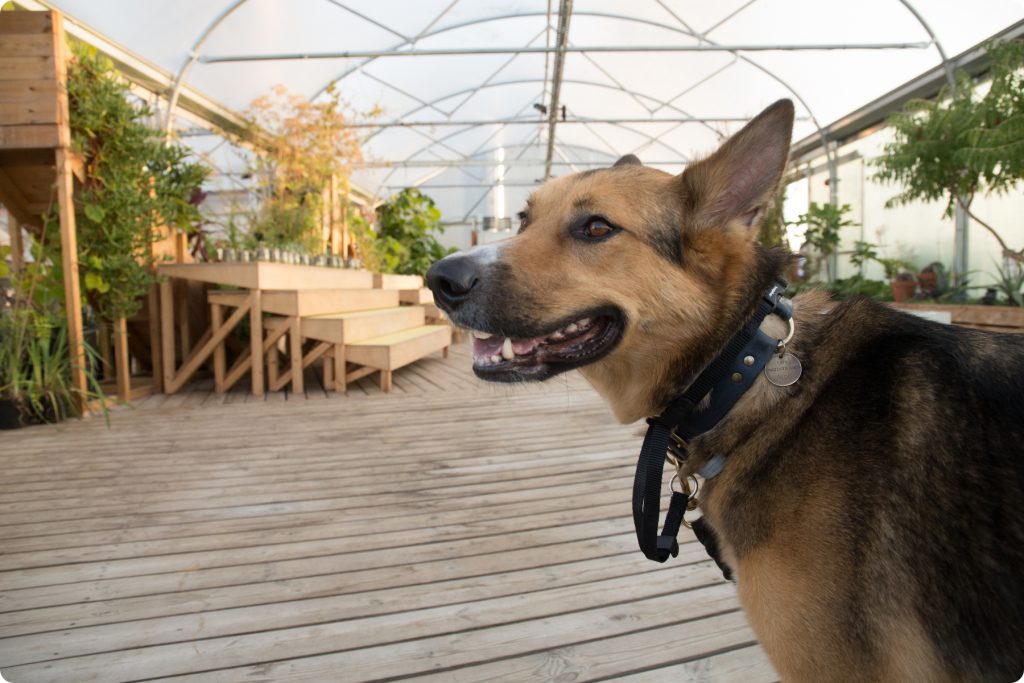 There in normal times you can also stop at the Jetty Peninsula, which is a lovely dog-friendly colourful place for brunch or coffee and a rest. The deserved conclusion of your great dog walk of The Line art trail if you got this far in one go!

For more walks inspiration, check out our guide to the best dog walks and trails in London